How To Identify The Best Photo From Hundreds Of Duplicates?

Duplicate Photos Fixer Pro Can Be Your Ultimate Saviour!

Finding the best image from thousands of identical & similar-looking snaps is like finding a needle in a haystack. Duplicate Photos Fixer declutters & filters out the best one automatically!

What are Duplicate & Similar Photos and How to Clean Them?

Photographs can be tough to maintain. Especially, when you use multiple devices to access your photos in real-time. Losing your data and images to a system crash or corrupt hard drive is a complete nightmare. However, what’s worse than that is having multiple copies of a photo in the destination folder. Sometimes, the reason behind duplicate photos or similar images is known to the user, while others have no clue why exactly their system has multiple similar photos in the folder. Some are even unable to find duplicate photos and don’t know how they affect the overall performance of their system.

If you have come across such situations where you had to manually deal with multiple similar or duplicate photos in your system, you already know how painful it can become to resolve the issue. People think of it as an accident and do nothing about the duplicates lying in their system. However, after this post, we are sure that you will not only be able to understand the core reason behind these duplicate images but will also know how to clean them. So without further ado, let’s begin this post by understanding what exactly is considered to be a duplicate photo and what is meant by similar photos.

Duplicate & Similar Photos: Why Do they Appear?

In your system library of images, there are multiple folders from across the storage of your system that are displayed to give you a perspective of images saved on your PC. You might have seen that some pictures are repeated several times in a folder and that too without any use. These images that are exact copies of a photo are called duplicates. Usually, when you have copied the same images multiple times or there has been an error while copying your files from an external source, duplicates are formed. The downside of having duplicate photos in your system is that they take up a lot of space which results in poor writing and reading speeds on the disk, eventually slowing down your PC.

On the other hand, if we talk about similar pictures, these are often created when you are clicking pictures. You see, in today’s age of social media one shot is never enough, you need options to ensure that you have the best one available to post, and while it gives you an option to choose from multiple similar pictures, it impacts your storage as well as the overall photo library. If you use a duplicate photo finder to remove the images as soon as you have chosen the best, it might not affect you much. However, if you leave those pictures in your gallery, chances are you will have to struggle while filtering the best ones at a later time frame.

All in all, we can concur that the core reasons behind the occurrence of duplicate and similar photos are -

How Duplicate and Similar Photos Can Affect Your System’s Performance?

Now that you are familiar with duplicate and similar photos, let us quickly understand how leaving these untouched can affect your system’s performance.

Storage is always a precious resource when it comes to computing power. When you have duplicate images in your system and you are not aware of them, they take up a lot of vital space that could have been used for other purposes. If you are facing storage issues, maybe looking for similar or duplicate photos in your system can help you out.

The more loaded your disk drive is, the lower its efficiency. You might have observed that your disks are being used at their 100% and are still not giving you the read and write speeds that you expect. The problem is that these duplicate images are occupying the space and thus the load on your drives is more than you expect it to be.

While using any computer or smartphone, looking at a messed-up system is a big turn-off. Images are often used to capture notes and important information. These images often are lost among the multiple images available in the gallery, thanks to duplicacy. Finding something when it is urgent becomes extremely difficult when you have a messed-up photo gallery.

So how to get rid of these duplicate and similar pictures that may cause a lot of issues in your user experience? The answer to that is Duplicate Photos Fixer Pro! What is that? Check out the next section to know!

Duplicate Photos Fixer Pro is a software that can scan the entire PC in minutes and find all the duplicate and similar photos that exist in your system. It can clean them in just a single click and also has an option for you to review, allowing you to make the decision of which one to keep and which one to remove.

Let’s take a closer look and understand how the software works step by step.

Step 1 - Open the Application and Import Your Images 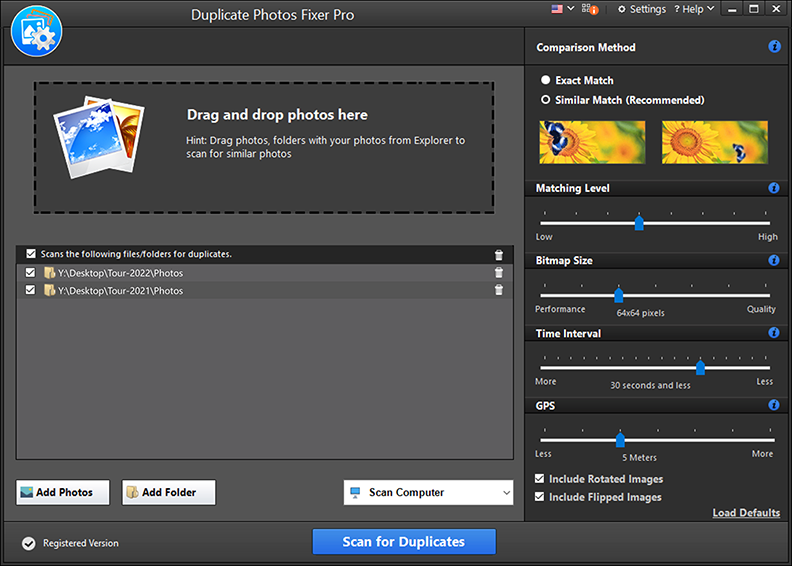 As soon as you have installed the software, you will find this screen. Click on the “Add Photos” option if you have some specific pictures to clean or you can also use “Add Folder” for a particular path in your system. If you are unaware of where exactly the duplicates exist, simply click on “Scan Computer” and let the software take care of it.

For the sake of this discussion we will be choosing a specific folder. 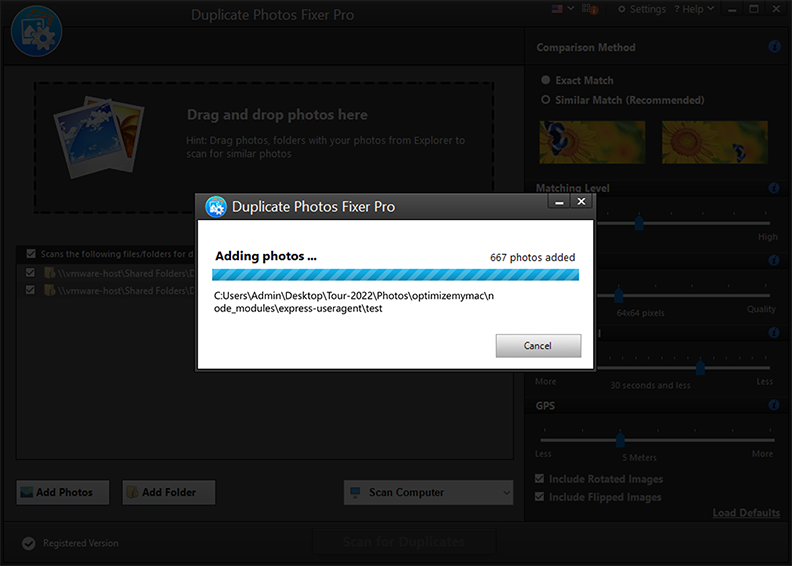 Once you have added a folder and selected it for scanning, click on the blue button that says “Scan for Duplicates”. This will start the process of searching and matching the image for similarities and duplicates. 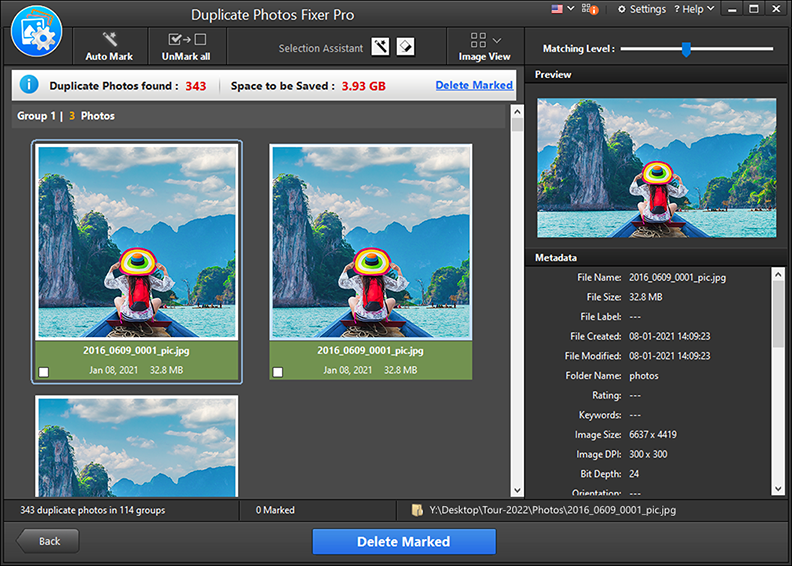 After searching for the images in your system, the duplicate photo finder software shows you the results and groups the similar images together so you compare and choose the better shot as per your needs. It also gives you an estimate of how many images are found and how much storage you can free up using the software. 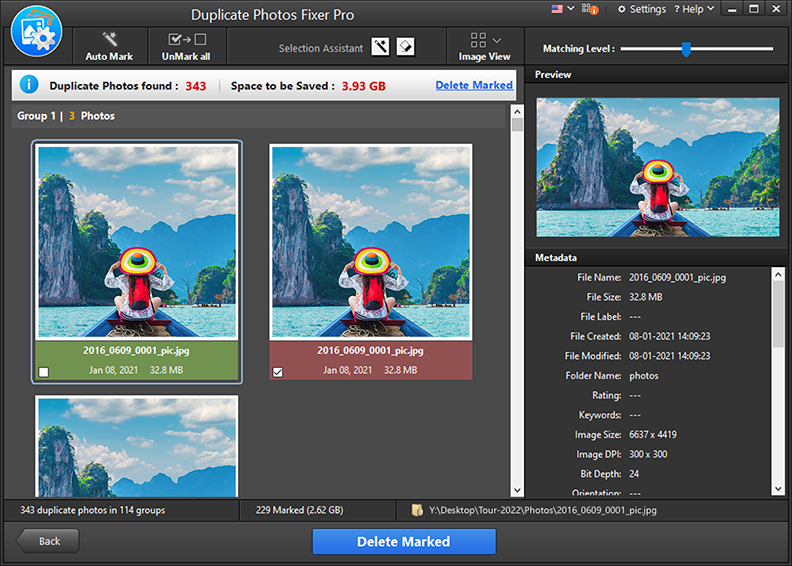 Once you have compared the results, simply start marking the pictures you want to delete from your system. The marked ones will appear in red and you will understand which ones are about to be deleted. You do not have to delete each of them one by one as after selecting them you get the option of deleting the marked pictures in just one click.

Step 5 - Read the Warnings Carefully and get Rid of All your Duplicate/ Similar Images in a Click! 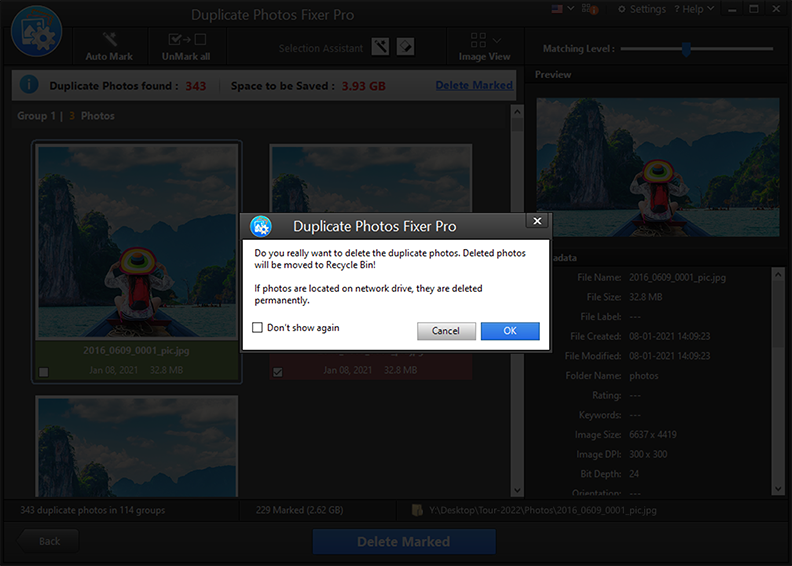 When you are done selecting, after clicking on “Delete Marked”, you get a warning message regarding the deletion of images from your system. Click “Ok” if you want to move ahead with the process. You can also click “Cancel” if you have marked an incorrect image. 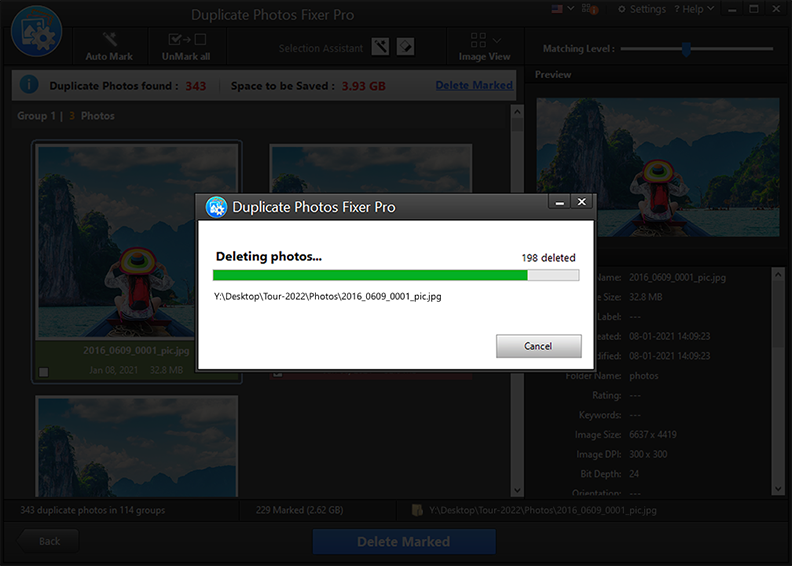 Once you click okay the system does its process and voila! 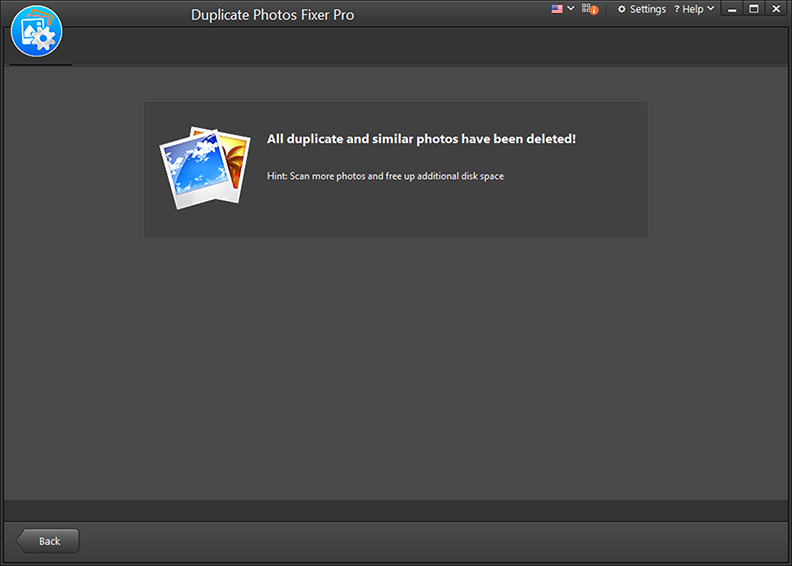 All your duplicate images have been deleted! It’s that simple to use!

If these similar pictures have turned into trouble, make sure you download this free duplicate photo finder and resolve the problem in just a few clicks. Because some things work best when left in the hands of a PRO! Good Luck.